Why does my cat?…

As a cat sitter I often wonder and get asked why cats do certain things so I’ve compiled a list of behaviours that our feline friends display and the reasons behind them.

It was commonly thought that cats only purr when they’re happy – kittens would suckle milk from their mother and purr at the same time. However, cats also may purr when they’re unwell or pain – the frequency of the purr would differ and it’s thought that the purr may be beneficial to the cat and aid healing. Kittens can’t see or hear when first born – they use touch, scent and warmth to locate their mother’s teat. In the first 2 weeks, they are dependent on their mother for survival. At 3 weeks they gain sight and at 4 weeks – they can land on their feet if they fall. At 4 weeks weaning also occurs. 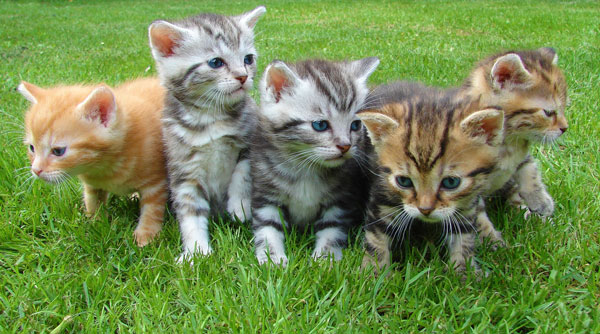 Why do cats bend and flex their paws when they’re on our laps moving round and round until they get comfy or on our new bedspread? Well it’s a behaviour learnt in kitten hood – kittens flex their paws against their mothers tummy to stimulate milk flow when they’re hungry.

If cats see a bird from the window and chatter or chirrup then it’s thought that the sound may because they’re irritated and showing barrier frustration as the bird is the other side of the window and they don’t have access to it.

Some people suggest that this noise is made as the cat is practising the kill bite at the sight of the bird.

Cats need to scratch! Shockingly and disgustingly de-clawing is a practice seen in some states in the USA – this involves removing the toe joint so will be extremely painful for the cat. LA, San Fran and Denver are some of the states who have banned this cruel deformation. Cats scratch to leave scent marks (they have scent glands in between their paw pads). They also scratch to shed old claws and produce new ones.

In the wild, cats would search for a separate water location away from where they would have had their prey. You can put the tap on for your cat so they have access to running water or purchase a pet water fountain – do buy replacement cartridges however and clean the fountain regularly and the filter to avoid lime scale building up.

Cats are natural predators, this is an innate instinct. You’ll see how cats pounce and jump on and at items that mimic prey such as show string mimicking a mice’s tail or real feathers on a piece of string that is moved around. Just like their wild ancestors, cats would eat 4- 6 small meals a day which would have been birds or mice. Hunting behaviour may happen whether a cat is hungry or not. As solitary, independent species they would have depended on themselves to get a meal so when the opportunity strikes they will hunt.. peckish or not!

By continuing to use the site, you agree to the use of cookies. more information